Over the past few months, the horses stabled on our Paddock Trail 1 have become incredibly efficient energy savers.  You rarely saw any of them move at all. This will probably always be a problem if you offer hay feeds from large racks. Despite this, the horses in the other herds always seemed to spend some time away from the racks, dotted across the available space, resting, sleeping or playing.

The entire PT1 herd, on the other hand, could nearly always be found standing around one of the two large filled hay racks.  GPS measurements showed a frustrating 2-4 km within 24 hours.

The Paddock Trail layout is as follows: 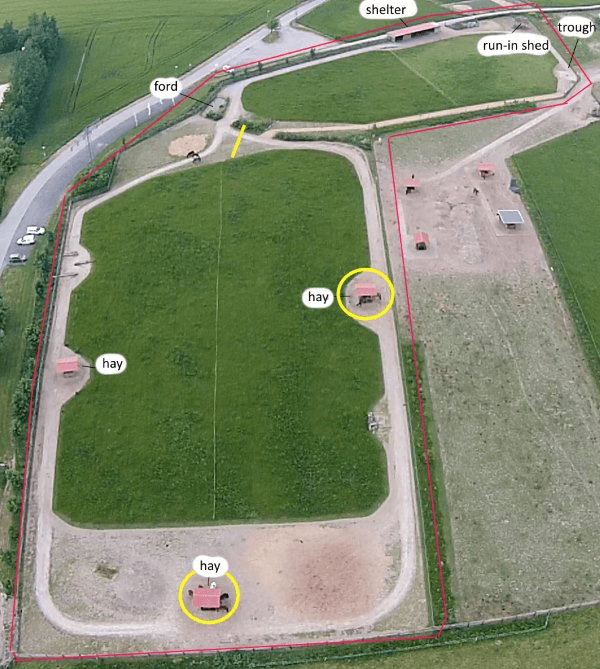 There are three large hay racks. As we had to switch over to round bales, we were only able to fill 2 racks at a time (the ones circled in yellow), as otherwise the hay would stay in the racks for too long, leading to a significant loss of quality in wet weather conditions.

In order to lengthen the routes for the horses, we added the small yellow fencing. This prevents them from, for example, reaching the ford directly from the hay rack on the right. 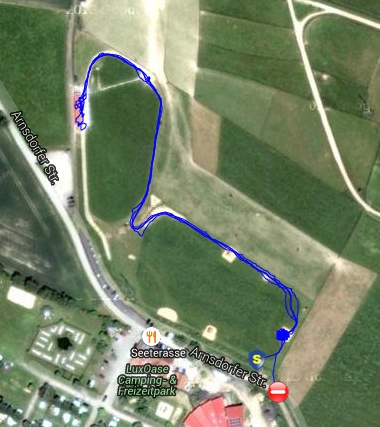 And here is a typical “horse image”: 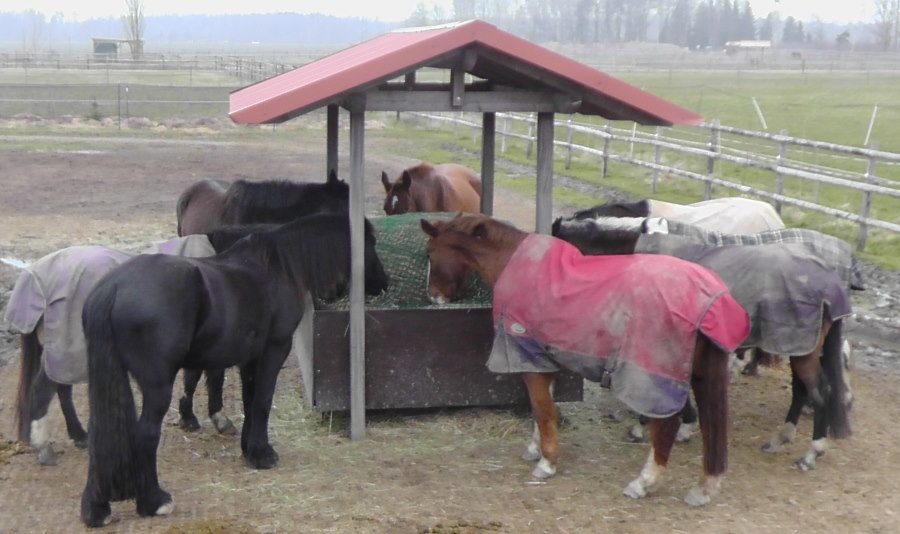 This herd featured an unfortunate combination of several aspects:

The leading mare (dominant and with a tendency to bitchiness) had left the herd. There was a discernible lack of security on the one hand (the herd preferred to stay huddled together), on the other, the general atmosphere was extremely harmonious (no one forcing the troops to scatter).

The neighbouring group’s hay feeding spots were moved. This meant that there were always a lot of horses (= more security) hanging around the right-hand hay rack. This made it an especially pleasant area for the horses to linger.

As the horses had become significantly fatter, we used very tight-mesh hay nets for feeding for several months last year.  This also led to longer feeding and standing times, which were maintained  (from force of habit) even after we switched over to larger mesh nets.

So what was to be done? We tried setting up small hay feeding stations at four additional points (the green circles in the following picture): 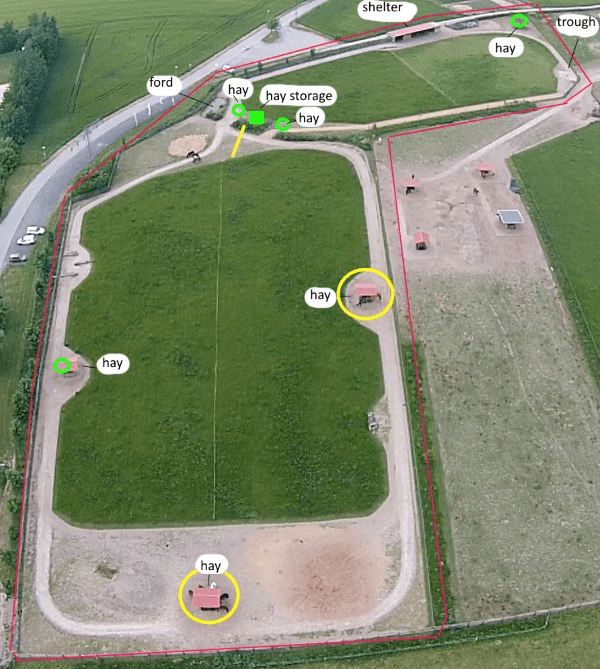 We hung a hay basket (“Heukorb Happy“) into the essentially empty rack on the left: 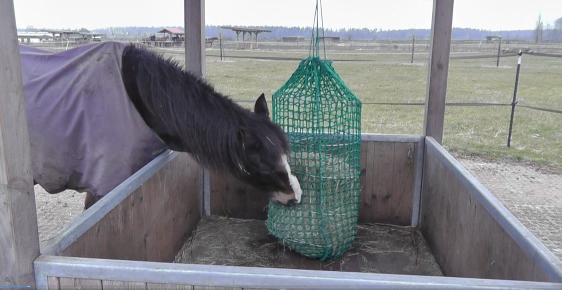 Small hay boxes (blue plastic box “the natural feeder“) and one wooden box with a plastic cover (“Heufresser“) were placed on either side of the dividing fence in the middle of the trail. 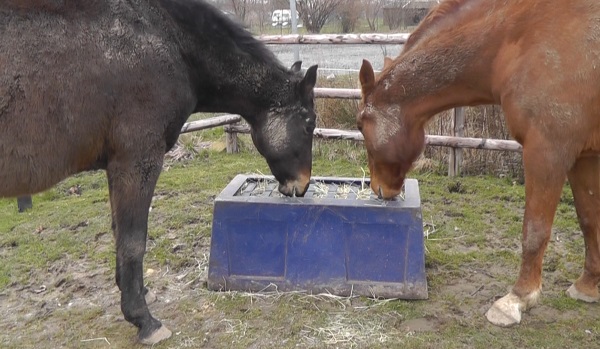 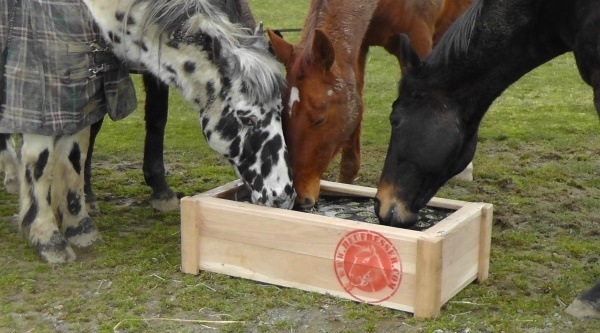 Two hay toys were also hung from the posts of the additional run-in shed.

The effect of these additional hay feeding stations was impressive. The horses still assemble around the large hay racks at communal feeding times. But they are also frequently scattered around the area. They clearly move around much more. Here is one example of a GPS image (12.9 km in 24 hours, after subtracting any measuring errors this still adds up to over 10 km). 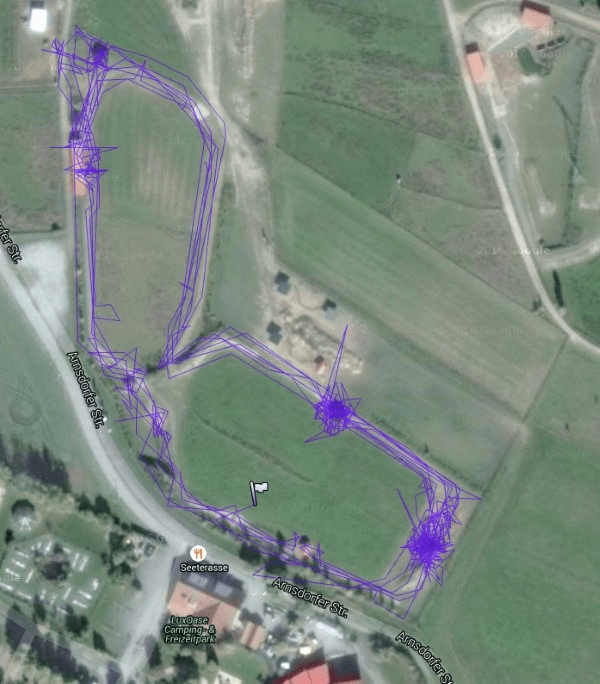 Of course, the next question was how to cope with the additional labour this involved. Unfortunately, filling hay toys and small boxes daily does not make economic sense for a large-scale operations – especially as you would have to provide the same options to every group.

Which is why we have tried to involve the boarders in our efforts. Several horse owners in this group in particular are no longer focused primarily on riding and are happy to help look after the horses’ well-being.

So we set up a small hay storage area (a hay bale placed on top of a pallet with a protective cover) close to the two small hay boxes to ensure that the effort involved in filling them by hand was at least halfway tolerable. 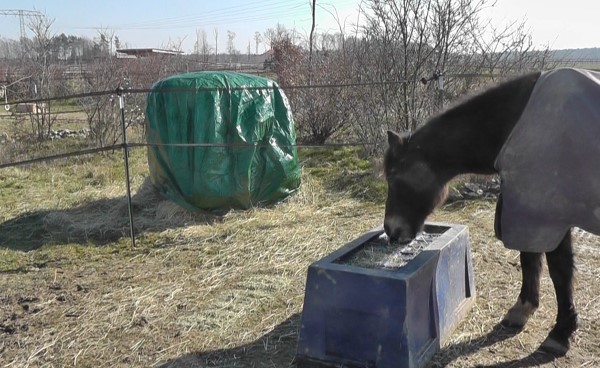 The following feeding guidelines were specified for the boarders:

The large racks are filled by us, as before.  This means that the horses always have enough to eat and the boarders are not required to fill the small feeding stations.

Filling the small feeding stations is voluntary. No one should feel pressured to help. The boarders who do participate in feeding must accept that this is for the benefit of all the horses. There is to be no “I always fill the stations, but xyz never does”.

This seems to have worked well so far. We have already scheduled a meeting with the PT1 boarders, who will probably provide us with more detailed feedback. We really hope this can be accomplished without any friction, as it does significantly improve the horses’ well-being. 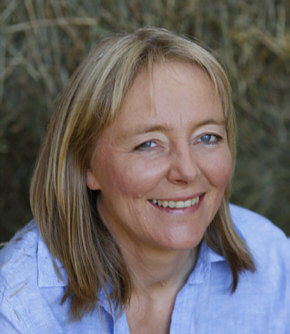 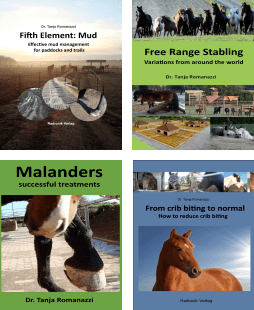